What is a Marsupial?

A marsupial is defined by Britannica as "a mammalian group characterized by premature birth and continued development of the newborn while attached to the nipples on the mother’s lower belly." There are more than 250 marsupial species throughout the world, including kangaroos, koalas, and opossums. Kangaroos, wallaroos, wallabies, tree kangaroos, pademelons, quokkas, bettongs, and pottoroos are marsupials belonging to the family Macropodidae, also known as Macropods. According to wallabyranch.org, "the meaning of the word Macropod is a Greek derivation of 'Large Foot.'" There are over 50 unique varieties of Macropodidae species, all of which reside in Australia and New Zealand.

How are Joeys Born?

Like all mammals, the eggs of a female kangaroo are fertilized by a male kangaroo through an opening called the cloaca. Similar to birds, the cloaca of a female serves multiple purposes, including mating, birth, and the excretion of waste. Unlike most other mammals, the single act of fertilization can create two individual embryos.

How is this possible? This diagram from Discover Magazine illustrates the unique makeup of the kangaroo’s reproductive system: 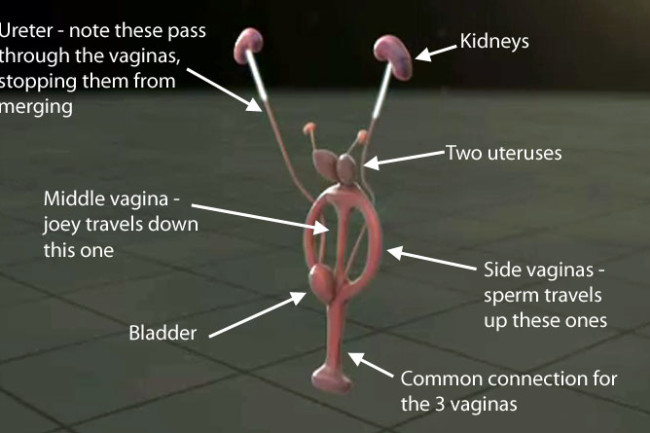 From this image, you can see that the female kangaroo not only has two vaginas, but she also has two uteri! The male kangaroo, with his similarly unique makeup, is physically capable of accessing both vaginas simultaneously and fertilizing eggs in both uteri, as well.

Although kangaroos are mammals, their resemblance to birds does not stop at the cloaca. Baby kangaroos, called joeys, are not grown within a placenta. In fact, the gestational period - or the length of the pregnancy - of a kangaroo is only about 28 days. During this time, the embryos are furnished with coats and “shells” to nourish and protect them. The joey is born once he eats his yolk (much like a hatchling). He must be small enough to travel through the middle vagina (see above) into his mother’s pouch – at this time, he is roughly the size of a jellybean!

At birth, a baby kangaroo is only about 1 inch in length.

So, why does the female kangaroo have multiple uteri if only a single joey is born at a time? The reason for this is a phrase known as “embryonic diapause,” an evolutionary achievement unique to many marsupials, including the red kangaroo, that allows the female kangaroo’s body to halt the progression of development in an embryo at an early stage, when the embryo is made up of only 70-100 cells, and is only about a quarter of a millimeter in diameter. This allows a single embryo to develop, enter the pouch, and reach near-maturation before the second embryo can progress.

The reason for this is multifaceted; should the initial joey fail to reach his mother’s nipple after birth, the female kangaroo’s body will send a progesterone signal to her other fertilized egg to continue its production. Once a single baby exits a uterus, the female can become pregnant once again, meaning that female kangaroos can remain perpetually pregnant once they are of breeding age. If times are tough and there is famine, an excess of predators, or other outside stressors on the female, her body can send signals to her reproductive system to stop the development of her embryos until she is prepared to care for an infant. This embryonic diapause can last for days, weeks, or even months!

At Babby Farms, it is not uncommon for pregnant kangaroos to halt the growth of embryos until warmer weather is on the horizon. It is rare for a female kangaroo to give birth during the months of October through February, although it is not unheard of. During cold Idaho winter months, Babby kangaroos, wallaroos, and wallabies are supplied with as much heat as possible, but it is often not enough for a mother to feel safe to take care of a baby too late into the fall and winter months.

What Happens After the Joey is Born?

Around the time of his birth, the joey’s mother carefully licks a thick trail of saliva from her cloaca, up through her pouch, to one of her four available nipples. This arduous journey can be done only by the joey alone. His arms are currently one of the most developed features on his pinky-mouse-like body, and he will crawl his way through his mother’s dense hair until he can find the nipple and latch on. Once there, the mother kangaroo’s nipple inflates itself, filling her baby’s mouth and holding him in place for several months, until his jaw develops and allows him to unlatch himself and begin suckling of his own accord. Until then, the mother kangaroo’s body sends a constant stream of “watery, high protein and simple carb, immunity-rich milk.”

The milk produced by a mother kangaroo is incredible in that her body can determine exactly which type of milk is needed for every growth stage of a joey. For newly born infants, the milk is more like the colostrum found in mammals like humans and llamas. As the joey ages, his milk composition changes to reflect his growth needs. Echidnawalkabout.com.au continues to say that “older pouch joeys get high carb, high protein and some fat [and] big joeys at foot get massive fat and protein and low carbs.”

Amazingly, this exceptional milk production can apply to multiple joeys at once! While both embryos are not born simultaneously, it is highly likely that the second joey will be born and enter his mother’s pouch before his sibling has fully weaned from their mother. It takes approximately 6 to 9 months for a joey to reach a level of growth big enough for him to leave his mother’s pouch on his own. Although it is not uncommon for a joey to suckle at the teat until nearly 2 years of age, once he has fully exited the pouch, he is old enough to be pulled from his mother to be bottle fed by humans, and he is developed enough for the mother kangaroo to feel safe giving birth to baby number two. And because each joey has his own nipple, the mother kangaroo provides each of her babies with the different types of milk required by both.

This year, we are welcoming the newest addition to the Babby roo family: Kanga! Kanga is Robin's and Kracken's latest offspring. She has only recently been pulled from her mother's pouch after approximately nine months of growth following her birth. We believe that Robin already has another baby inside her pouch or is ready for another baby to enter. 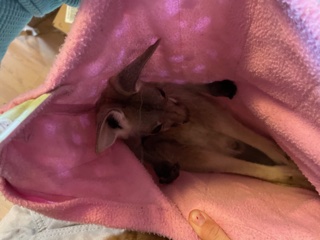 We are so excited to get to know Kanga, and we know you will love meeting her once we open in May 2021! Congratulations, Robin!